Trujillo is a beautiful medieval town slightly north east of the centre of Extremadura. The town itself is of Roman origin but is probably best known as the birthplace of many of the Conquistadors, the Spanish adventurers who conquered South America in the 15th Century.

The older part of the town is virtually unchanged from that time with beautiful buildings and a main square – la Plaza Mayor – that was voted the 4th prettiest in the whole of Spain. 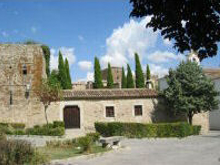 The town has around 10,000 inhabitants and in common with most places here lots and lots of fiestas, including Semana Santa (Holy Week), Chívri (Easter Sunday), la Feria Internacional del Queso (the annual Cheese Fair) and many others – some with a religious base and some just as an exclude for the local people to enjoy themselves!

There are many pretty villages and small towns in the rolling countryside around Trujillo and most of them have shops, cafés and restaurants, primary schools, health centres, pharmacies, municipal swimming pools and all the main essentials of life, as well as their own fair share of fiestas.