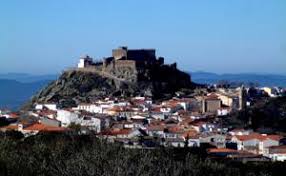 Montánchez has a population of under 2,000 people and is a friendly welcoming place with all the traditions you would expect from a Spanish village. It sits on top of the Sierra de Montánchez in the centre of Extremadura, halfway between Caceres and Merida. The earliest references to Montánchez date from 1095 when it was a Muslim fortress; Romans and Goths have also settled here, and all have left evidence of their presence, such as the Roman castle perched on the top of the hill.

Today the village is in known for three things, its castle, its jamon and its cemetery! In 2015 Montánchez cemetery was named the best cemetery in Spain, and it truly is a beautiful place with some amazing views of the surrounding countryside

The castle is the focal point of the community with the local fiestas at both Semana Santa and the local fiestas focusing around the Local Saint, St. Consolation. It’s a long climb up but, like the cemetery, the views give the WOW factor.

The main claim to fame is the award winning Jamon Iberico which is known throughout the world. The local black footed Iberian pigs are fed solely on acorns, creating a delicious ham which is served wafer-thin; so thin at times that it can almost melt in your mouth. Every year there is a fiesta which attracts 10,000 people to Montánchez who celebrate the Jamon and other Iberico delicacies, all washed down with a fair degree of local wine! 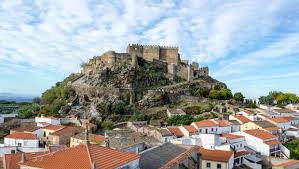 Nearby Almoharín is famous for its fig tree farming; the figs are exported worldwide including those covered in chocolate and on sale in Marks and Spencer!

Arroyomolinos a small village where every year they re-enact one of the most famous battles of the peninsular war, the battle of Arroyo dos Molinos, which took place on 28 October 1811. It also has one of the most stunning walks in the regions, la Ruta de los Molinos.